Early summer is a magical, yet slightly annoying, time for us. I’m excited to go home after what would have been a long season abroad, especially with no visits home. It’s also the beginning of contract season. If you aren’t lucky to be in the middle of a multi-year contract, you’ll undoubtedly spend the majority of the summer going back and forth with your agent and various teams, who have expressed varying degrees of interest.

It can be an exciting time if the right team puts the right offer on the table, but it’s generally a process that keeps me, and most WAGS I know, in a constant state of edge. Every time an offer is on the table I spend days researching the city, schools, quality of life, and if things don’t work out with that team, I move on to the next and spend countless hours wondering where we’ll be a few months down the road. Now that we’re a family of 6, there’s a lot to consider.

Over the years, I’ve had countless people tell me they envy my life. Apparently I lead a charmed life. The travel. The exotic locales. The adventure of it all. The life of an overseas basketball wife is apparently an exciting and glamorous one. Lest we not forget the endless shopping sprees, VIP treatment, and non-stop jet setting. Basically a 9 month vacation.

If only that were the reality of my life.

Don’t get me wrong, this is no pity party. I have, with the whole family, been able to travel the world, experience multiple cultures in multiple continents, learn a couple of languages (which are then quickly forgotten), and give the gift of open-minded worldliness to my children (made up concept but you know what I mean), which is worth far more than I can really articulate.

With all that said, it’s still not easy and it’s not always pretty. Anyone that knows me knows that I rarely complain. That’s because I have little to complain about. But what people don’t understand is that the lack of complaint does not equate to a perfect and charmed life.

No complaints about this little cutie

Living a life overseas is filled with the usual challenges like language barriers, adjusting to different cultures and cultural norms, and being without friends and family to help us navigate it all. You spend months studying language books, trying to find a friend or two, and trying to maneuver through twisty, turny, non-numbered, narrow, and mostly cobblestone streets. Just when you think you’ve mastered the basic phrases in a given language, and made some friends, you end up in new and different country, possibly continent, and have to start the learning process all over again. Considering that we’ve been in 5 countries thus far, that equates to a lot of new beginnings.

There are also challenges specific to basketball itself. When making a decision during contract negotiations, it’s deeper and more complex than who is offering the most money. If you have children, are there adequate schools? Do those schools teach in English? Are you in a safe neighborhood? Not just safe in regards to crime, but not hostile towards Americans and foreigners. If you don’t drive (guilty!) are you able to walk to a grocery store? Or are you shit out of luck if your man and/or driver if you have one, are unavailable.

There’s a lot to consider and the process usually takes a month or two, with the guys reporting for training camp in August. Most seasons start mid to late October, so we are usually long gone by now. We’re still here because the offers this season have all been lacking, either with regards to money or location. We’ve been offered lots of money to play in a few Middle Eastern countries but that’s not somewhere I’m comfortable going with a gang of kids. Don’t get me wrong, there are many Americans, some with families, on teams throughout the Middle East, but we’re intent on staying in the European market. That’s what my husband enjoys and it’s what we’ve become accustomed to.

Other things to consider is the team and their standing. My husband would love to be on a dominant team at the top of the standings, but aside from a few powerful ones, he has mostly played on teams hovering in the middle of the pack and worse. It drives me crazy because in every country we’re in, he’s at the top of the leader board in rebounding and sometimes blocks as well, but if his team isn’t winning then he won’t get picked for the all star game and generally won’t get the recognition he deserves. It turns me into a real hater when he’s averaging 9 or 10 rebounds a game, yet we end up fielding terrible offers. So we wait. We wait for a better offer. A better team. A better location. There’s a fine line between settling for a mediocre offer and being employed, and holding out because you know you deserve more, but then just sitting around playing the waiting game.

We try not to panic since the season has officially started, but this is the longest we’ve ever been here after the summer break and it’s a strange feeling. I tell myself that since we could have taken a million mediocre offers we still have some control over the situation. It’s just frustrating to see the recent changes going on in the overseas market, but that’s another discussion for another day. For now I am grateful for the extra time I’ve been able to spend with my family and friends. We’ve been able to do so many things that we usually don’t have time for, and were actually here to celebrate the first Halloween that our 2 and 4 year old have ever experienced. With all that said, I’m really just hoping and praying that we get out of dodge before the temps reach the freezing mark!

The fabulous 5 (including our super hot dog)

There were many days spent playing in Central Park 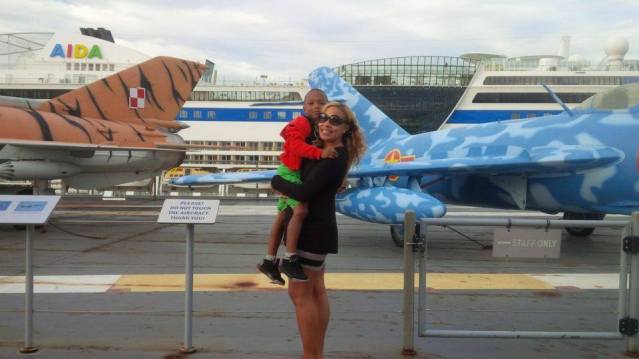 The boys love their airplanes

So although our summer has been an extra long one, it has at least been an awesome one.

← Welcome to the World Baby Anaya!
In The Blink Of An Eye →