If you’re an American woman you are pretty used to the standard doctor’s office routine, especially for that yearly gynecological check-up or Obstetrics visit if you’re pregnant. You’re first seen by a nurse who takes your vitals, you’re then left alone and told to change into a paper robe until the doctor comes in and the fun begins.

That yearly pap is never a good time, but it’s a necessary evil and it’s all very clinical, so bearable. Upon learning I was pregnant in Germany a few years ago, I was pretty surprised and uncomfortable to experience the German doctor visit. Vitals were taken before going in with the doctor, and once in the office/exam room you are seated to discuss the reason for your visit. The doctor then instructs you to remove your pants, underwear, and shirt, keeping on your bra if you prefer. No paper robe, no privacy screen, just me sheepishly removing my clothes while the doctor waits at the foot of the exam table. Over the course of that year, it never did get easier for me to walk across the room butt naked.

I’ve come to learn that Europeans are just more open and comfortable with nudity and their bodies. Although I was born in Europe, I was raised in the states so my bashfulness is American all the way. Even in Turkey, where I would think it would be a bit more conservative, they show breasts and ass freely on television, but censor any hint of cigarette (although just about everyone out here smokes btw). It’s an interesting thing for me to get used to.

With this pregnancy I was prepared for anything, but what I found here was also pretty strange for me. I’m now in my 6th month and I have yet to have a single pap smear. Not even a blood test to confirm pregnancy. Upon telling the doctor I believed I was pregnant she immediately gave me an ultrasound, prescribed some prenatal vitamins, and sent me on my way. 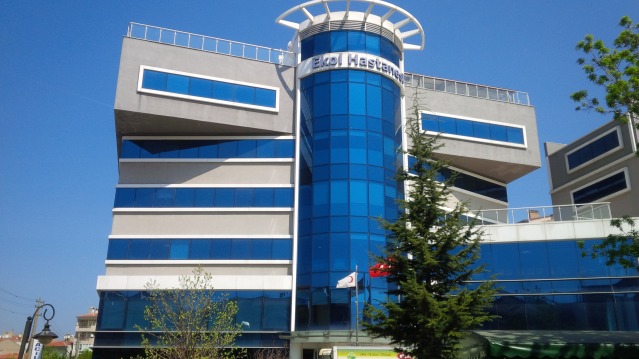 I’ve also found that in keeping with the general lack of personal space here, there is also a complete lack of privacy. There are no Obstetricians in the hospital that speak English so they said they would have a translator to help during my appointments. It was only after my first appointment that I discovered they couldn’t find a translator so they used another patient who spoke English and also happened to be a teacher at my children’s school. Upon hearing that I was pretty pissed, especially because they were all joking about how I could have possibly gotten pregnant while on the pill and were offering up options, including abortion. How they felt it was acceptable to just bring a random person in, especially one that could tell all my business at school, just boggles my mind. After I complained about how inappropriate that was they found a hospital employee working in the lab to translate, which is at least a little better.

Still, on another occasion, they (which included the doctor, the assistant, and the translator) brought in the man from my husband’s team who accompanies us to appointments and helps with other miscellaneous things, and discussed what medications I needed and God knows what else. What if I had hemorrhoids, a yeast infection, or some other embarrassing affliction? This random guy would be privy to it all. Lucky for me the diagnosis of the day was anemia, which he would know since he’s also the one who gets our prescriptions. Ugh.

I’ve also received some medical advice that I have found strange. One night I had strange pains that I had never felt with the other three. Sharp and fairly constant over a period of 5 hours or so. They felt unlike any contraction I ever felt and different from the usual growing pain jabs I feel from time to time. We went to the doctor the next morning and they felt my stomach and gave an ultrasound to make sure that everything was ok. The diagnosis, to my surprise, was gas. Even more surprising to me was the treatment. I could not exercise for three weeks, had to lay down often, could not drink my daily glass of fresh squeezed orange juice, and had to wear socks at all times. Ok then. I wasn’t really sure what wearing socks and exercise had to do with gas but it wasn’t like I could really get a second opinion. Seeing the ultrasound gave me the peace of mind I needed so all was well, but still.

On the positive side, I’ve never had a pregnancy where I’ve had an ultrasound performed at every single appointment, including both 3D and 4D visuals. So at least if I’m unsure of exactly what’s going on, I know that I can see my little girl kicking and moving at every visit, and I get to hear and see her heart beating, which brings me much comfort.

The other good thing is that I’ve not been warned about my weight gain, which has been the case for two out of my 3 prior pregnancies. Doctors seem to discount the fact that my husband is 6’11, and coupled with my size, we were never destined for small babies. When I was pregnant with my first, the doctor in Boston warned me every visit that I needed to slow down with the weight gain because the baby was too big. She even tried to push a c-section due to size, which I thankfully avoided. I gained 35 pounds total, my least amount to date, and my daughter was almost 10 pounds so I really felt like she could suck it. With my last in Germany they gave me the same weight warnings, but there really isn’t much that I could have done to slow it down. I ate well, exercised, and still gained 55 pounds. My son was 11 pounds and I had a lot of amniotic fluid so I was bound to gain some weight. I didn’t need to hear about it every five seconds.

Here, there hasn’t been one word about my weight and it’s such a relief. 20 pounds gained in 6 months is more than most, but they just say that I’m fit and healthy and that’s it. They asked what kinds of food I eat and recommended a daily boiled egg and yogurt (which I already eat) and that was that. It’s very refreshing that they don’t harp on something I can’t entirely help. 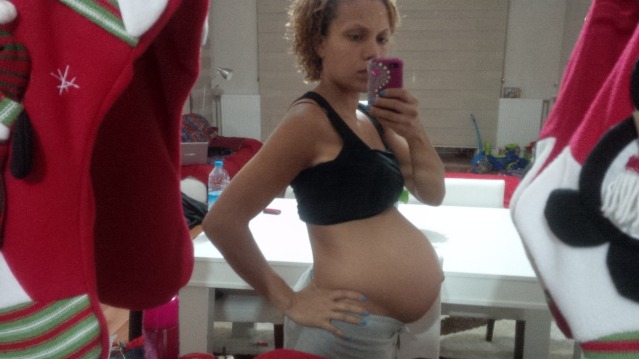 The big belly in all its glory at 24 weeks. I’m aware that my Christmas stockings are still up. Don’t judge me.

Everything seems to be done very casually and no one is ever in a rush to get you in or out. Appointments can be made within a day, times changed with ease, and unless you have a major problem, there are no problems. Sometimes I miss the rigidity of the states, but I have come to appreciate the more relaxed environment out here. Only one appointment left and then it’s back to America where they’ll hopefully tell me that all is well, nothing was missed, and they won’t yell at me about my weight.

2 Comments on “The Foreign Doctor Experience”

I can't believe my little German boy is 9 years old today! 🥳🎉 Happy Birthday to the absolute sweetest kid I know! He's so kind and full of love, and I'm beyond blessed to be his mommy! ❤ #birthdayboy #raisingkings #blackboyjoy #9yearsold
Happy 7th Birthday to my sweet baby girl, Anaya! She's truly a princess in every sense of the word, and I wouldn't have it any other way! ❤🥳🎉🎊 #birthdaygirl #princess #diva #blackgirlmagic #raisingqueens
Much needed ❤ #family #friends #beach #hamptons #blackboyjoy #blackgirlmagic #blackfamily #blacklove
❤❤❤ #anniversary #blacklove
11 years married, 17 years together, and endless laughs shared. Happy Anniversary to us and Happy Birthday to you my baby! I wouldn't want to be on this ride with anyone else 💝🎉🥳 #happybirthday #happyanniversary #blacklove
Congratulations to our Kaden for graduating elementary school and finishing up a tough year! 🥳 Although it was a zoom graduation, we are still so proud and excited to celebrate such an amazing child, who showed nothing but resiliency and dedication these past two years. You handled our move and transition back to the U.S. with ease, made new friends, and managed to excel at school and sports, and all despite being in the midst of a global pandemic. You deserve the world kid, and we are so excited to see what middle school at @avenuesed brings! 🎉🎊 #graduation #middleschoolbound #raisingkings #blackboyjoy
Follow BasketWifeLife on WordPress.com